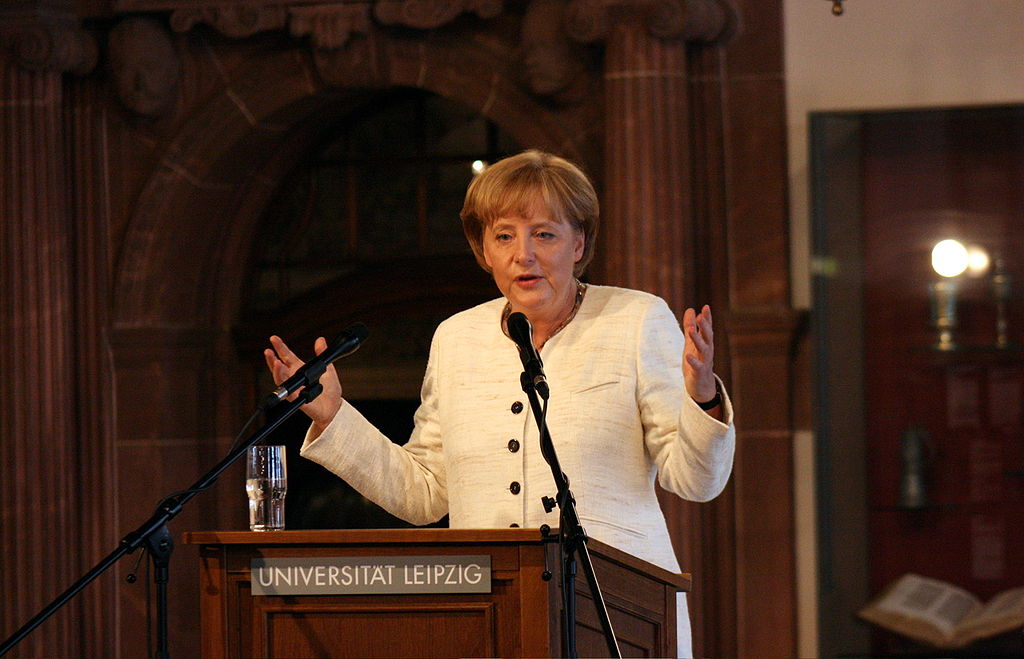 Oberservers say there has been an immediate sympathetic atmosphere when the Indian Prime Minister Manmohan Singh first met his German counterpart Angela Merkel at the Hannover Trade Fair in April 2006. He – the Sikh from Punjab- and she – the protestant woman from eastern Germany. Both not being the typical representatives of their state and only shortly in office. Both looking back at academic careers, making their way to politics through powerful mentors. He is internationally regarded as the architect of the  reforms helping the Indian economy to grow like never before, she was considered to be the “World’s Most Powerful Woman” at present in Forbes Magazine.

Merkel was born in Hamburg. When her father, a Lutheran pastor, received a pastor ship at the church in a small town in the state of Brandenburg, the family moved to Templin, north of Berlin- which was at that time considered communist East Germany. Even today that connection to her roots has quite an importance to Angela Merkel. She once said: “I consider it very important for political leaders, even when they are in government, to have a local voting district.” After spending her childhood in a small town, Merkel studied physics in Leipzig and earned her Ph.D. at the East German Academy of Sciences based on a doctoral thesis on quantum chemistry. And after being rewarded the doctorate, she worked in the research field.

At the age of 35 Angela Merkel got involved in the growing democracy movement after the fall of the Berlin Wall in 1989. She joined the newly established party Demokratischer Aufbruch- Democratic Awakening. After the collapse of the communist regime, she appeared on the political stage for the first time. Following the first democratic election of the East German state, she became the deputy spokesperson of the new pre-unification caretaker government. At the first pre-unification general election in 1990 she was elected to the Bundestag and her party merged with the West German CDU (Christian Democrats).

Shortly after this, Angela Merkel’s career took off. The West German Chancellor Helmut Kohl named her his Minister for Women’s and Youth Affair. In 1994 she became Minister for Environment and Reactor Safety and was the youngest minister in Helmut Kohl’s 3rd cabinet. As his protégées, the media called her “Kohl’s girl”. During this time she surely gained a greater political visibility and a platform on which she could build her political career. Despite her male colleagues Angela Merkel was not trying hard to earn political prominence, she was rather pulling the strings strategically from behind. She first came to prominence during the CDU party slush scandal by criticizing her former mentor Helmut Kohl and advocating a fresh start of the party without him. When Kohl lost the election in 1998, Merkel was named the Secretary-General of the CDU. In 2000 Merkel was elected to become the CDU party chairman, thus becoming the first female chair of her party. Even though opponents stated that she lacked all the attributes which are necessary to become a successful politician since the hasn’t been a member of the Youth Association of her party and thus didn’t seem to have a broad base of political contacts. And as a protestant lady she doesn’t quite fit the original composition of the party: the CDU is a male-dominated, socially conservative party with deep Catholic roots. But as the leader of the CDU Merkel enjoyed more and more popularity. From 2002-2005 she was the chairwoman of the CDU-CSU (Christian Social Union-sister party of the CDU) parliamentary party group.

In the federal election in November 2005 Merkel ran against former Federal Chancellor Gerhard Schröder. She won, became Germany’s 8th post-World War II leader and now leads Germany’s Grand coalition. Dr. Angela Merkel is simultaneously the first female Chancellor of Germany since it became a modern nation-state in 1871 and also the first eastern German to hold the office. She is the youngest person to be the German Chancellor since the Second World War. And in 2007 she became the second woman to chair a G 8 summit after Margaret Thatcher. As a strong self-confident female politician from a centre right party and a scientist, Merkel has been compared by many to the former British Prime Minister Thatcher. After her election Social Democrat Peter Struck pointed out: ”Any woman who can fight her way to the chancellorship of the Christian Democratic Union has certain strengths!” Observers say she will surely need her reputed toughness to push fundamental reforms through while holding a potentially fractious Grand coalition with the Social Democrats together. When Merkel became Chancellor two years ago Germany had the lowest economic growth in Europe. Thus she announced in her first government address the objective of improving the German economy and reducing unemployment. In early 2006, polls showed that Angela Merkel had the highest approval rate among Germans ever to be recorded for a chancellor since 1949. However her popularity has fallen and risen on and off since then.

On the way to India

India has been a stranger for Angela Merkel so far. But her visit to the Asian country is coming up soon: in autumn of this year Germany’s Chancellor will join a business delegation to visit India. It will be her first visit to India.